Internatinal seminars in May and June 2022

In the following two months, three ph.d. candidates will present parts of their research in Odense (Denmark) and Ostia. The topics of the seminars range from sanctuaries in the Roman world to earthquakes and the architectural risks associated to earthquakes.

An important aspect as not only a ph.d. candidate, but also as a researcher and employee at a university, is to spread the knowledge, you have gained. This often happens through articles and books, but another important step before publishing ones results, is to present it for an audience of experts, archaeologists, professors and other ph.d candidates. Sometimes, an audience can be very diverse, which has its advantages, and other times, the audience is working within the same field or ancient city. Presenting one's ongoing research at a seminar often results in important feedback and furthermore, the last step of most seminars and colloquia, is to publish the presentations in written form through an antology. In this way, you have been tested live in front of an audience and you have gained more important aspects, which can be utilised in the further process of your work. It is therefore important to participate in seminars and colloquia as a ph.d candidate. Not only to spread your research, but also to gain experince speaking in front of an audience and maybe more importantly, to test your theories and to receive feedback thereof.

You can find the programmes and titles for the following seminars here.

Opening of the exhibition in Tieranatomisches Theater, Berlin

Thursday April 7, 2022, we had the opening of our exhibition at the Tieranatomsiches Teater in Berlin. We are very surprised of the many people who showed up and showed an interest in the exhibition and our project. We would therefore like to thank everybody who attended. It went beyond our expectations.

Below, you can see some pictures from the evening and more will follow.

In the exhibition, we have two areas with virtual reality. In one, you can experience the story behind the excavation, the altar and experience a sacrifice in the 2nd century BCE in the centre of Rome’s ancient harbour city. This has been made in close corporation with Themes 2, 3, 4 and 6. In the other, you can have a detailed look at some of our finds, which have been of utmost importance in regards to the reconstructions. This has been made in close corporation with Themes 1 and 5. However, the VR-glasses are only available on selected days, which is why our corporation partners from the Technical University of Berlin, Jakob and Markus with assistance from Victoria, have made two videoes, where you can see the VR-world. You can find the video of the excavation and altar here and the video regarding the finds here.

In one room, three objects are exhibited. They are 3D-prints of two finds and the room TFR 2, where we have been excavating since 2016 and where we have found the remains of the altar. The two finds consist of a bowl with the inscription A P L O N I (a dedicatory inscription to Apollon) and a head of the emperor Hadrian. You can read more about the process behind the 3D-printing here.

For the reconstructions in both the videoes that runs in the exhibition as well as the reconstructions in the VR-world, we all have to thank Steven Götz. He worked closely with us to create the exact shapes of houses, temples and altars, thus making it look as authentic as possible and most importantly, to make it look as the archaeological evidence pointed towards. Without his exhaustive work, the exhibition would not have had this important aspect of visualising our hypotheses in a 3D and 4D world - one of the main aims of the Ostia Forum Project as well as the Ostia Graduiertenkolleg.

We a delighted to finally present our exhibition at the Tieranatomisches Theater in Berlin. The exhibition revolves around the individual projects of the Ostia Graduiertenkolleg. On the opening day, we invite people for a reception. The entrance is free of charge. Therefore, if you have the time, we strongly recommend you to attend the opening – we will all be present.

If you do not have the time, then do not worry. The exhibition is open until September 30, 2022. The entrance will remain free of charge. 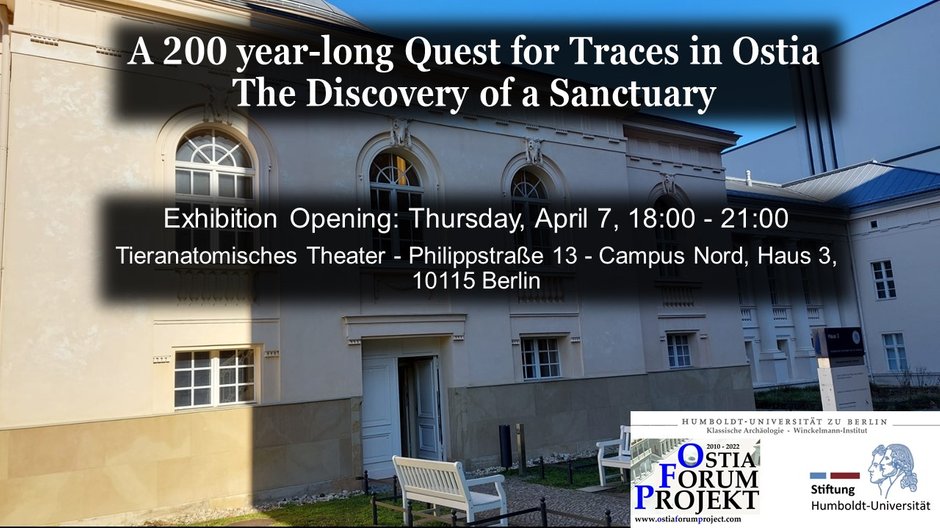 Preparations for the exhibition in Tieranatomisches Theater, Berlin

Wednesday March 30 and Thursday March 31, we were all at the Tieranatomisches Theater to prepare the opening of the exhibition A 200 year-long Quest for Traces in Ostia: The Discovery of a Sanctuary.

We are looking forward seeing you all to the official opening tomorrow Thursday April 7 at 18:00 – 21:00. You can get access to the exhibition already when the museum opens at 14:00.

During the last decade, virtual reality has become a thing in many museums around the world. Also wihtin history and cultural heritage is virtual reality an instrument utilised to visualise ones ideas to an audience .The Ostia Forum Project and its college, the Graduiertenkolleg, are no exception. The past six months, we have been working on applying our research results to a virtual reality space. This is being done in close collaboration with Jakob Korbel from the Technical University of Berlin. We do this, because we have been given the opportunity to exhibit our excavtions and different sub-projects in the Tieranatomsiches Theater in Berlin.

The focal point of this sub-project is the excavations and scientific results from TFR 2. The virtual space is going to show TFR 2 in its present state as well as its antique state, before the Hadrianic shops were built. In the preceding periods leading up to the Hadrianic phase, the area, in which TFR 2 is located, belonged to one of the major sanctuaries of Ostia. You can read more about this under Theme 2 and 4, but also here and here (Chapters 2 and 4).

In the virtual space, it is going to be possible to see finds and to read about them. This way, it is going to be easier for the viewer to see details and inscriptions on for example pottery. Furthermore, it is much easier to flip large architectural decoration built in marble in a virtual space than it would be physically on site in Parco Archeologico di Ostia Antica.

Monday January 24, 2022, we had a workshop, where Jakob Korbel presented his hitherto work. During this workshop, we all had the chance to experience the virtual reality inside TFR 2 and to pick out some finds. The purpose of this workshop was first and foremost to see, where Jakob Korbel is in the process, but also to be able to proivde him with (archaeological) feedback.

Below you can see some pictures from the day.

Holiday Greetings from the Graduiertenkolleg

Everybody at the Ostia Graduiertenkolleg wish everyone a merry Christmas and a happy New Year!

Hopefully, 2022 will follow in the footsteps of 2021 in terms of academic outcome in our Graduiertenkolleg. We are all very excited to share our newest results with you in the forthcoming year!

Exhibition in the Tieranatomisches Theater, Berlin

It is with great pleasure that the Ostia Graduiertenkolleg together with the Ostia Forum Project can reveal that we are going to make an exhibition at the Tieranatomisches Theater in Berlin starting April 1 2022. For now, it is planned to run until September 15 2022.

At the moment, we are all working hard on how to approach exhibiting an excavation and what this should involve. Indeed, the exhibition does not only concern the excavation as such, but does also include the scientific results. We are going to have different types of presentations regarding the ongoing research and results in the heart of Rome’s ancient harbour city, but we are also going to provide the opportunity of experiencing our research through Virtual Reality made by our new cooperation partner, Jakob Korbel from the Technische Universität Berlin.

We are all very excited about this new perspective and opportunity of our projects.

Last but not least, we also wish everybody a io Saturnalia.

Daniel Damgaard, Theme 6, will be presenting parts of his research at the DFG-Graduiertenkolleg 1913 "Kulturelle und technische Werte historischer Bauten" in Cottbus, Germany, November 17 2021 at 9.30 AM. The presentation will be a combination of physical presence and online.

The presentation is titled: Unknown Forum Structures in Ostia: The Syntehsis of Stratigraphy and Geo-physical Excavation Data regarding the Development of the Forum's Area.

The Graduate College would like to wish everyone a very merry Christmas and a happy New Year!

This year has been a very difficult one for everybody in the world, and we can hopefully look forward to a different year in 2021, where we can restart it all in a better way.

As you all can read on this website, we have been active throughout 2020, which included several online meetings, but also a small campaign in Parco Archeologico di Ostia Antica. This campaign was, however, a bit limited, but we did manage to succeed.

If you are interested in reading something about the projects, you can visit them here.